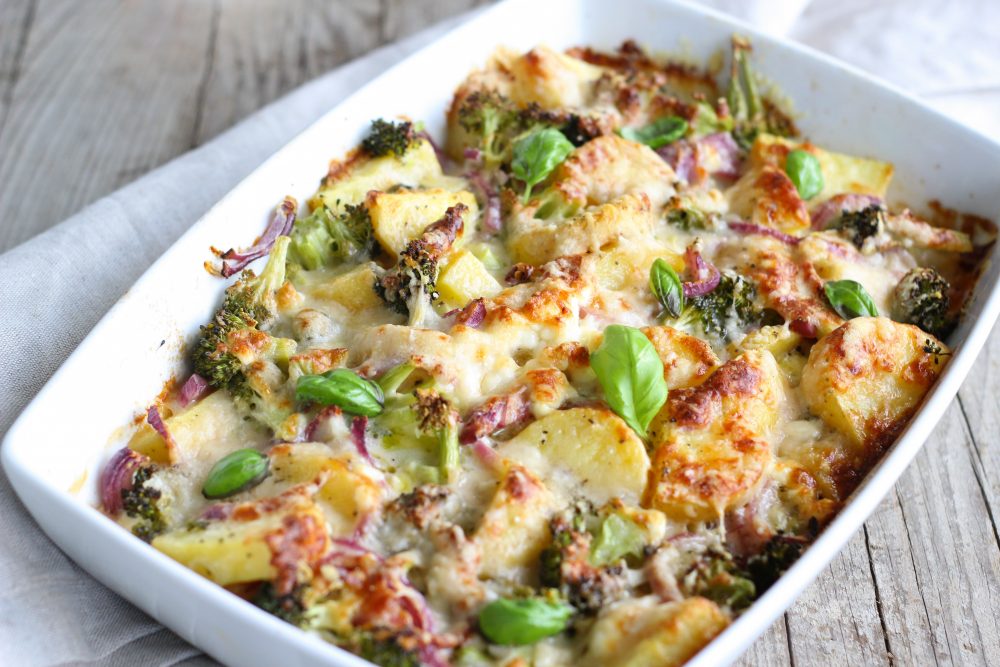 Potato casserole is easy to prepare. Chop or slice the food into thin slices, layer it and pour the cream and egg or sour cream over it – and pop it in the oven. The casserole can be made as a pie with mashed potatoes instead of dough.

This casserole is also called shepherd’s pie. It is a traditional British dish. It is a potato casserole with minced meat. In ancient times, minced meat was used. Topped with Worcester sauce and rosemary. Celeriac, onions, carrots, pumpkin were parsed and stewed with the meat and spices. The mixture was covered in a layer of mashed potatoes and baked in the oven.

Early cookery books described a recipe for making this dish from leftover roast meat of any kind and mashed potatoes.

To this day, there is still debate as to whether this simple and hearty dish was invented in Ireland, England or Scotland.

History of Appearance and Proliferation

Shepherd’s pie began to be made in Scotland, Ireland and Northern England in the late 18th and early 19th centuries.

The name shepherd’s pie was not used until 1877. Sometimes it was called peasant (cottage) pie. At the end of the 15th century England annexed Ireland and the Protestants became peasant landowners. These were low-income people who lived in small cottages. Hence the name casserole.  Meat was the main ingredient – beef or lamb. But, the original shepherd’s pie is only made with lamb or mutton. If beef is used in the recipe, it is a peasant pie. The term was introduced in 1791. Potatoes were introduced to Ireland in 1589 by Walter Raleigh.

The potato then became a staple food for the poor, living in small cottage-type houses for rural workers. During this period beef production began to increase. But the peasant version of the pie contained specifically lamb, as it used to be cheaper. Cookery books described a recipe for a meat casserole with mashed potato crust from the remains of a large Sunday roast dinner.

Casserole became popular in 1870, when the first meat grinders became available to the masses.

What is the name of the potato casserole in different countries?

Depending on the ingredients that are added to the potatoes, the result is a festive or casual, vegetarian or meat dish.

Meat, fish, other vegetables, mushrooms and cheese can be added as ingredients to the potatoes.

In the UK, casserole is made with ham and turkey.

The Cumberland version is made with breadcrumbs.

The English version comes with fish.

When making potato casserole, it is not necessary to follow the recipe exactly:

● You can replace the olive oil with butter or clarified butter, taking more or less according to your taste.

● Celery can be excluded.

● Use red onions instead of ordinary onions or add leeks.

● You can add some carrots or tomatoes to the minced meat.

● You can add wine when frying the minced meat.

● You can put a little ground nutmeg in the mince.

There are the most common versions of shepherd’s pie – these are Scottish, American and traditional (Irish or cottage).

If you don’t eat red meat, you can substitute minced chicken or turkey in the recipe.

Traditionally, ground beef or lamb is used for the casserole. However, it is possible to experiment. A fattier version is achieved with minced pork, a leaner version with minced chicken or turkey. Pass the meat through a meat grinder. You can add 2-3 cloves of garlic if you want to end up with a light garlic flavour. Or use the garlic when frying the minced meat with the onions, or rub it into the roasting tin.

Another main ingredient is potatoes. Sugar cauliflower potatoes are great, but you can experiment and take yams or make a mix of regular potatoes and yams. Cheese, cream, milk and oregano can be added to the mashed potatoes. The main prerequisite is that it must be thick and not runny. Or you can make the mashed potatoes the traditional way.

Salt and ground black pepper are standard spices for shepherd’s pie. Add some fresh thyme when frying the minced meat. You can also experiment with rosemary, oregano, smoked paprika or even Worcester sauce, which is used in Caesar salad dressings.

Recipes vary greatly from region to region. But they are all similar in their basic structure: the unchanging crust of mashed potatoes on top and bottom, and minced or chopped meat on the inside. The meat must have fat in it in order to avoid dryness. The meat is first stewed over a low heat in a sauce of onions and other vegetables (celery, carrots or peas). Assemble the casserole into a thick mashed potato, topped with meat gravy and vegetables, gravy and classic seasonings (mayonnaise, parsley, pepper).

The recipe for this old English dish hasn’t changed much over the centuries. In some areas of England, thinly sliced lamb fillets are used instead of minced meat and celery or parsnip root is added.

It’s a simple way to vary your daily diet. Yesterday’s potatoes or mashed potatoes are the base of the casserole. Eggs, sour cream or cream, milk and cheese are also essential ingredients. The casserole can be served with sauces – creamy sour cream, garlic or tomato sauce. Any meat or fish dishes will go well with the casserole.

The subtleties of cooking:

● You can boil the vegetable in jacket and grind it in a meat grinder.

● You can make a casserole of coarsely grated raw potatoes.

● Remove any excess liquid: if you grate the potatoes, squeeze them out before putting them into the mould. The same goes for the rest of the vegetables.

● When preparing the mashed potatoes: After boiling the potatoes, drain off all the water. Add only the butter and salt. Do not leave a gram of water in which the potatoes were boiled, otherwise the casserole will fall apart.

● The number of eggs does not have to be the same as the recipe: take more – the mass will firm up better, less – the consistency will be looser.

● A lot of cheese is delicious, but sometimes it gets in the way of making the potato casserole properly. It’s better to spread it out between the layers.

● The sauce for filling the potatoes must spread evenly over the mould. To do this, pour not only in the centre but also on the sides of the container. Shake it a few times and then put it into the oven.

● Mash it with milk and a little butter, add salt and pepper.

● Fry the chopped onion in the vegetable oil.

● Put all the filling into the mould.

● Place the mashed potatoes on top.

● A brittle layer is formed on top.

The potato casserole can be kept in the refrigerator for 1-2 days. Use a glass or plastic container with an airtight lid.

Frozen potato casserole can be stored for 1-2 months. To avoid the formation of moisture during storage, use a sealed container or a container with a lid, or you can put the dish into a baking dish and store it in the freezer.

The casserole will keep at room temperature for no more than 6 hours.

A cheese casserole made with ground beef and potatoes. You can add smoked sausage to the beef. For more flavour and taste. Use several kinds of cheese. This is a very hearty and nutritious dish.

A quick and easy casserole to make. Chicken mince with garlic lightly flavoured and creamy filling. Tender mashed potatoes with a crispy crust.

Traditional recipe. A juicy and flavourful filling of lamb and vegetables. Tender and creamy mashed potatoes. When baked, a crispy crust comes out on top. A favourite dish of the Irish, it’ll be your favourite masterpiece for everyday menus.

The casserole is light and nutritious at the same time. The fish adds juiciness and tenderness to the dish. For a diet variant, you can add less butter to the mashed potatoes. Use low-fat cheese.

This incredible potato and lamb casserole with succulent minced lamb stuffed with peas, corn, carrots, red wine and Worcestershire sauce. Fresh herbs such as thyme, rosemary and parsley add even more flavour and aroma. Add the creamy garlic sauce and top the mashed potatoes with parmesan. You can use minced beef instead of lamb.

A dietary, vegetarian casserole. Add the broccoli to the mashed boiled potatoes and mix with the eggs and cottage cheese. Bake the resulting mixture under a layer of cheese to make the casserole even more appetising.

9. A classic shepherd’s pie with a Mexican twist

This casserole uses lean ground turkey mince. It is ground turkey breast mince and has fewer calories and less fat than normal mince. The Mexican flavour comes with hot peppers and sharp cheddar cheese. The casserole has a savoury flavour.

A meat and vegetable tart stuffed with a crispy baked potato shell, covered in a creamy, cheesy mashed potato and then baked again. Cut the potatoes in half, fill with the filling and cover with the cheese and potato mixture. A very pretty serving dish that will grace any table.