A pita is a Middle Eastern flatbread with a “pocket. When baked, water vapor forms inside, which inflates the dough, thereby creating a cavity inside. Afterwards, the pita is deflated, but the pocket remains. To “open” the pita, you need to cut the edge with a knife. Usually, inside the pita is smeared with sauce and stuffed in the form of lettuce, meat or a mixture of both. There are lots of filling options, but that’s a story for other recipes.

Pita is traditionally baked in an oven or tandoor. Or in their modern counterpart, the oven. And the dough contains yeast. In this recipe, we will depart from the canon and make a yeast-free pita in a pan.

Why is the pita not inflated?

I came across this recipe on YouTube. It seemed simple enough to me, and I decided that I would make it and shoot it the first time. But it didn’t turn out to be that easy. The first time I didn’t have pita bread puffs, I didn’t get a pocket, I got just flat tortillas. And the second time the same thing happened.

To understand the reason for the failures – I reviewed several other videos with this recipe on YouTube. They repeated the same thing, and offered absolutely identical proportions of ingredients. But there was no answer to the main question: why doesn’t the pita puff up?

Or rather, not exactly so. The emphasis in all of these recipes was that the dough must be handled very carefully. You can’t allow cracks to form on it when you roll it out, otherwise steam will come out of it and nothing will work. Later on, my experiments showed that this can happen, but you have to pierce the dough several times with a toothpick.

But, for example, the occasional theoretical indentation from fingers or fingernails – does not affect the result. I checked – I deliberately poked my fingers and nails into the unrolled dough, and it subsequently inflated exactly as untouched. And I did it deliberately hyperbolized, so that myth #1 can be considered dispelled.

The second myth is that tortillas must be perfectly round. Look, we’re not trying to recreate molecular cuisine recipes here, we’re trying to bake simple tortillas. It doesn’t affect the result. Do not worry about it, do the shape you get. These are homemade scones, they do not have to be shaped like a perfect circle, on the contrary – the flaws of the shape only add to their charm.

Armed with logic and the third portion of the test, I found the answer. The secret is in the heating. The pocket inside is created by the emergence of steam. If the heating is weak, not enough steam is generated to inflate the cake in the right way. At the same time it is necessary to maintain a balance: to create enough power for evaporation and at the same time not to burn the future pita bread outside. I will tell you how to achieve this below.

Sift the flour, add a pinch of salt (don’t be afraid to overdo it) and 1/2 tsp of granulated garlic.

Pour 200 ml. of hot water, 2 tbsp. of vegetable oil and knead the dough with a spoon.

It will take you about two minutes.

Transfer the dough to a work surface and continue to knead with your hands. By the way, the dough is very easy to work, it is absolutely not sticky to your hands and surface. As you can see – I don’t even add flour at this stage.

The dough should be kneaded until smooth. If the dough is not kneaded well enough, it can also cause a flat cake instead of a pita.

Above is an example of a dough worth working with for another 2-3 minutes. The surface is loose and should be smoother.

Unfortunately, I don’t have an example of a fully kneaded dough. I didn’t take a picture of the process when I made the second and third time. If you’re afraid of slipping, you’ll have to time it. 7-10 minutes for kneading will be enough. If it takes longer, it won’t be any worse.

Transfer the dough to a plate and cover with a towel or clingfilm so that it does not become weathered. The dough can also be folded into a layout or left on a work surface covered with a towel. Allow to rest for 20 minutes.

Roll out the dough

Take out the dough, knead for another minute, roll out into a roll and divide into 8 equal parts. To do this, first divide the dough in half, then divide each piece in half again and in half again.

If you’re a perfectionist, add up the weight of all the ingredients, divide by 8, and measure each piece on the scale. But in my opinion, this is unnecessary.

Roll each piece into a ball. To do this, flatten the dough on a work surface, fold the edges in the center to make something resembling khinkali. Turn it over and, as if stroking with your palms, achieve a round shape. It is not necessary to make it perfect, but try to make the top of the dough as smooth as possible.

Cover the balls with a towel or clingfilm and let rest for another 10 minutes.

Sprinkle the work surface with flour before rolling out the tortilla. At this point I already put the pan on low heat to let it heat evenly and not waste time in the future.

Take a ball, sprinkle with flour and roll out into a circle 16 cm in diameter. You can cover with clingfilm, but I didn’t bother.

Roll out the remaining dough by stacking the tortillas one on top of the other.

Flip the tortillas over so that the one rolled first is on top and proceed to fry.

I mentioned above how important heating power is. But you can’t just say average heat and hit the mark. There are too many factors: burner power, material and size of the pan, and time.

To exclude all possible questions and bring you as close to success as possible, I will describe in detail my starting parameters:

Let me be clear: all of the above are not binding conditions that must be followed. Most likely you will succeed from the first time and without this information. But in case you fail, you can compare, analyze, and work on your mistakes.

The frying pan is hot, here we go.

Place pita on pan and brown on one side for about 30 seconds. Small bubbles will start to pop on the surface, wait until one or two large bubbles start to pop and flip.

Roast for another 20 seconds on the other side. Prepare to flip a second time, but first increase the heat to medium-high power (about 75% of the burner power) and flip.

The scone will begin to puff up almost immediately. When fully puffed, flip it over a third time, turn the heat down to medium-low and brown for another 20 seconds. Transfer to a plate.

There is no need to puncture and knock on the pita, it will deflate on its own.

Repeat with the remaining tortillas. Cool and serve.

Pita bread without yeast in a pan

4.67 from 3 votes
A pita is a Middle Eastern flatbread with a pocket inside. When baked, water vapor forms inside, which inflates the dough, thereby creating a cavity inside. Afterwards, the pita is deflated, but the pocket remains. To "open" the pita, you need to cut the edge with a knife. Usually, inside the pita is smeared with sauce and stuffed in the form of lettuce, meat or a mixture of both. There are plenty of filling options, but that's a story for other recipes. Traditionally, pita is baked in an oven or tandoor. Or in their modern counterpart, the oven. And the dough contains yeast. In this recipe, we will depart from the canon and make a yeast-free pita in a pan. 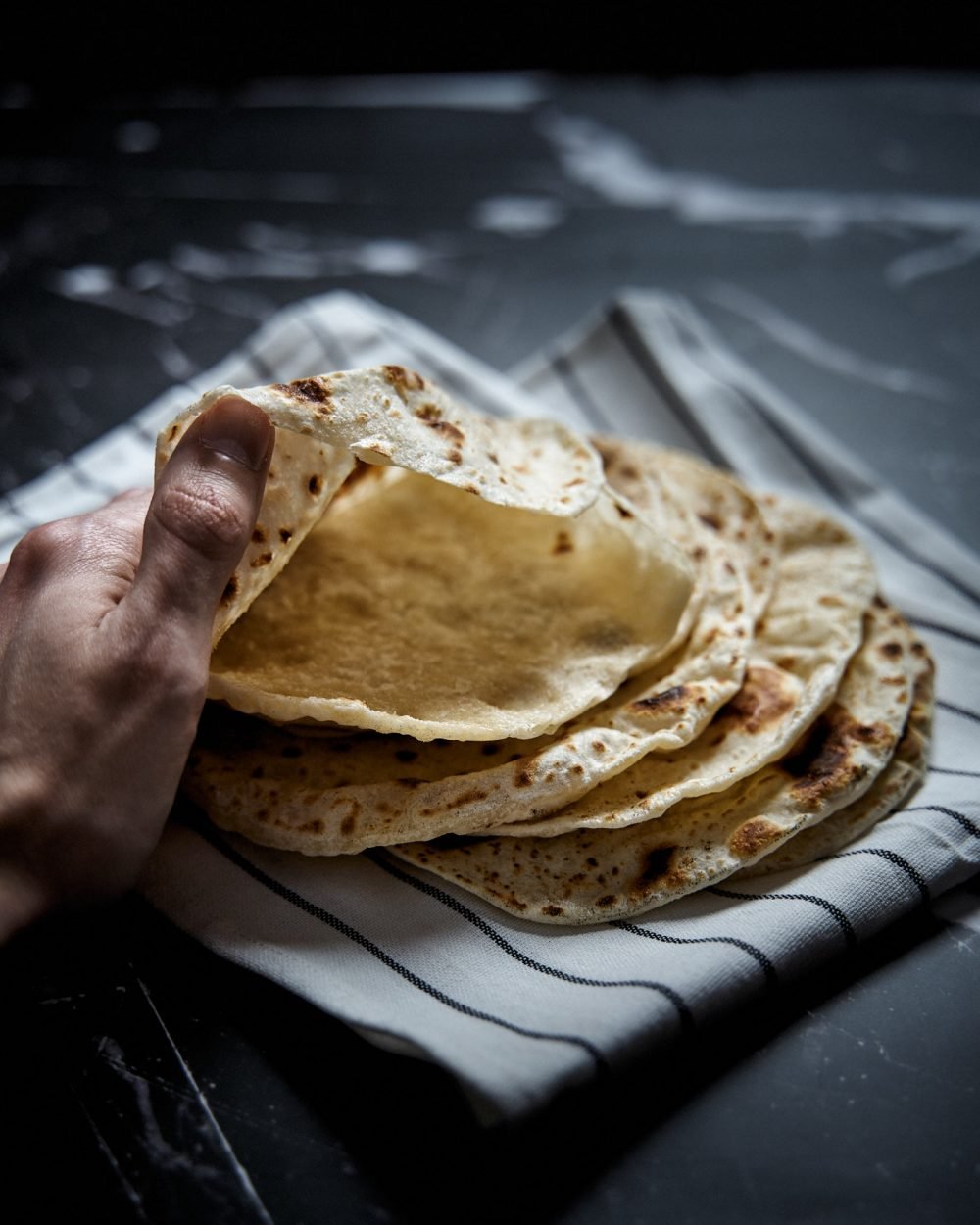 Homemade Bread in One Hour 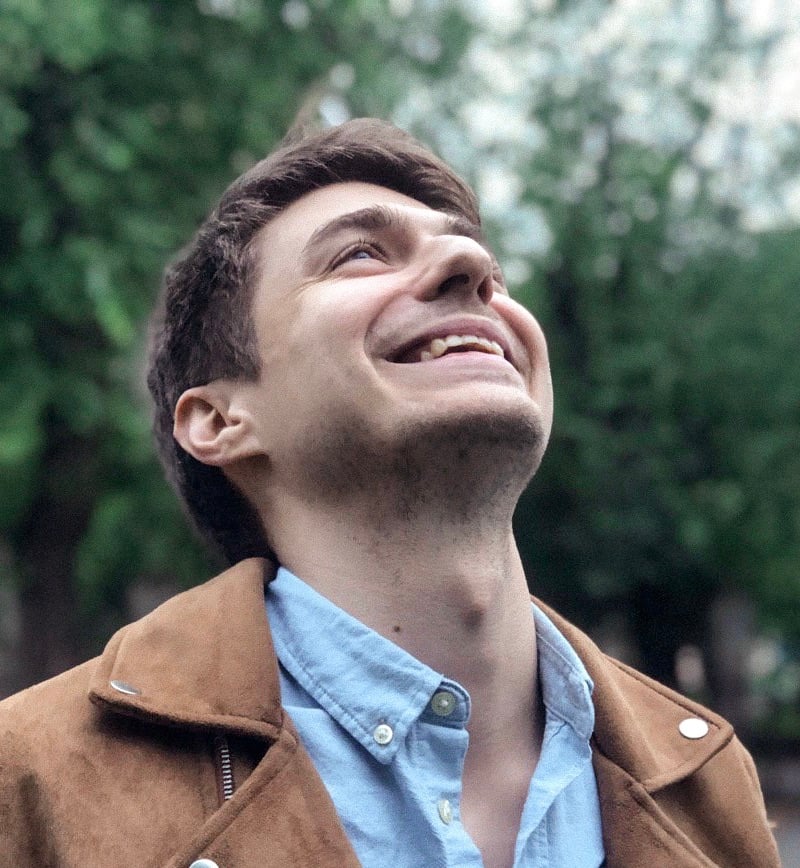