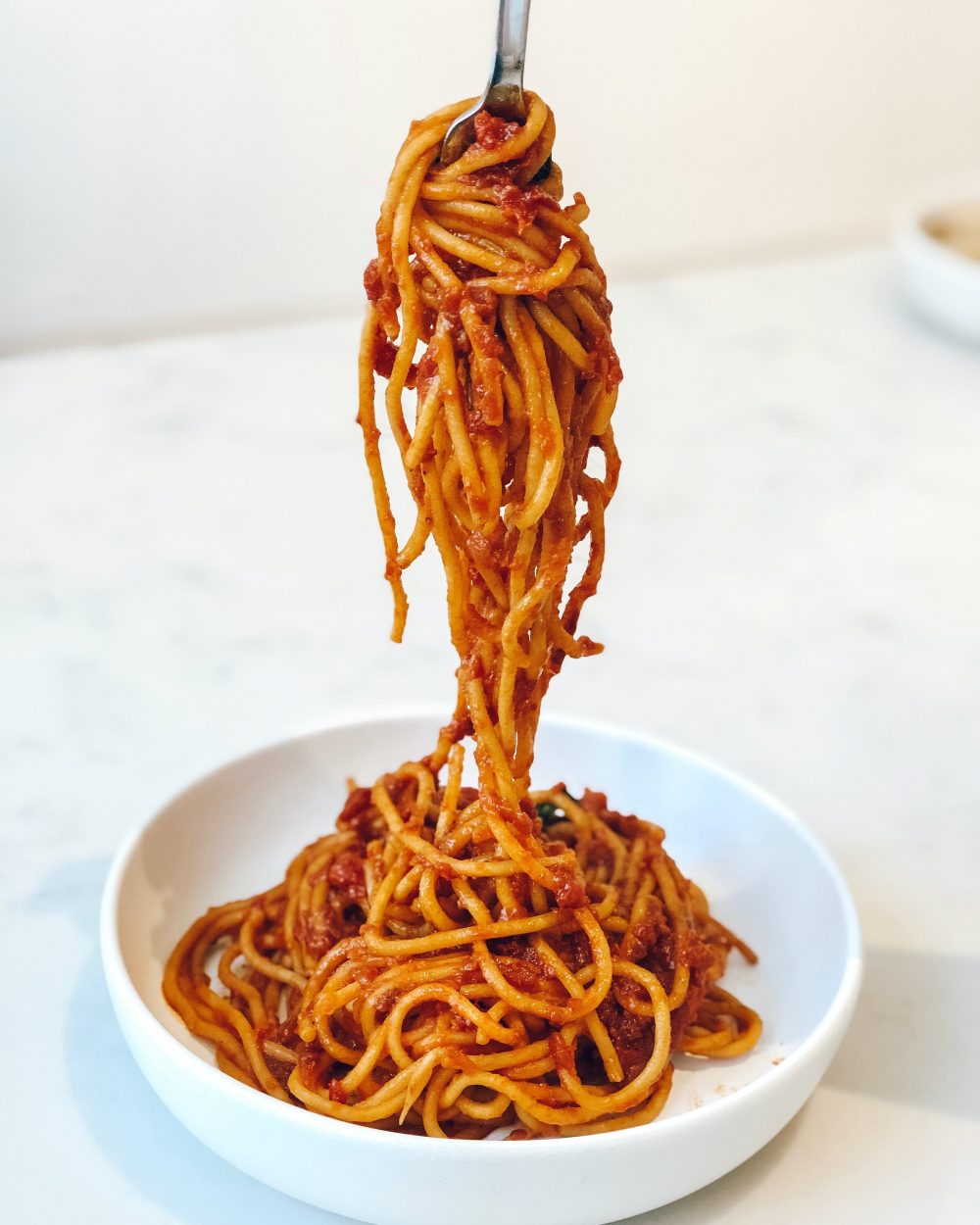 Bolognese sauce comes from the Italian province of Bologna. Hence the name of the sauce. Bologna is considered the culinary capital of Italy.

In Italy, the dish is called Al Ragu (‘ragu’). Ragu is a generic term in Italy. It is used to describe any meat sauce that is cooked over low heat for several hours.  It is not served with spaghetti, but only with tagliatelle, the classic egg pasta. Italians believe that meat goes better with pasta that is wider and flatter.

Italy’s cuisine is original and varied. The country’s dishes are well known beyond its borders. When Bologna came up with the idea of making Bolognese sauce, it became one of the most favourite and most famous in Italian cuisine. Today – it is prepared not only in Italy but also abroad.

Tomato Bolognese sauce is one of the best dishes on a simple menu.

The Italian sauce became widespread and popular as a result of the country’s decline, severe poverty. People, used to lavish feasts and celebrations since ancient times, found themselves in a difficult situation.

The sauce was originally prepared as a stew and always supplemented with a portion of spaghetti.

The combination of meat, vegetables and carbohydrate paste gave a quick satiety, satisfying the feeling of hunger.

The first documented mention of ragu with pasta sauce dates back to the end of the 18th century. The recipe at the time differed from the modern version of the sauce – it was not based solely on veal. The author of the recipe, chef Pellegrino Artusi, suggested using truffle, chicken liver and cream.

The basis for the traditional recipe for Bolognese sauce is not just ground beef, but also pancetta. This is a piece of fatty pork brisket that has been cured in spices. The addition of this bacon gives the traditional dish a distinctive smoky flavour.

There are many varieties of Bolognese. The most common versions are the traditional and the vegetable versions.

The emergence of pasta with Bolognese sauce

In Italy itself, the name “Spaghetti Bolognese” spread later than in other countries. It originated in America.

The first mention of using Bolognese sauce with “spaghetti” pasta appeared in Julia Lovejoy Cuniberti’s book Practical Italian recipes for American kitchens. In it, she suggested using the sauce together with pasta or spaghetti. Dry tagliatelle is very brittle in texture. At the time it was mostly spaghetti that was sold in America. It was a great success in America. A few years later it made its way onto the menus of the most famous restaurants in New York. From then on it became famous all over the world.

Today, spaghetti Bolognese is sold in packets, in jars, and in frozen form. A major producer of the canned version is the American food company Heinz, which has been making it since the 1960s.

What is in the Bolognese Sauce?

The classic recipe for minced meat sauce has gone a long way to being modernised and shaped. Tomato Bolognese sauce is always made with olive oil.

In its simplest form, Bolognese is minced meat in a tomato sauce.

Experiment with the ingredients for the sauce – you can add tinned tomatoes, sweet peppers, various spices and herbs.

Tomato Bolognese sauce contains B vitamins, vitamins A and C, essential oils, minerals, (potassium, iron, phosphorus, zinc). The sauce contains a lot of lycopene – a natural antioxidant – to protect cells from harmful substances. Lycopene, together with beta-carotene, helps reduce the amount of harmful cholesterol in the blood and reduces the risk of heart attacks and strokes.

Bolognese sauce contains salts and acids. If gastro-intestinal problems, kidney disease or gout are exacerbated, it can be consumed with caution.

Bolognese is contraindicated for people who are allergic to tomatoes.

The sauce tastes sweet and sour, with a bright tomato-meat flavour.

To make the classic, traditional Bolognese sauce, you must prepare the main ingredients correctly and observe the cooking conditions:

What Should I Use the Sauce with?

The best-known and best-loved dish in Italian cuisine is pasta with Bolognese sauce.

The classic version of Bolognese is traditional Italian lasagne. Béchamel is also added to this pasta, creating a unique combination of flavours and aromas. You can serve pasta (“this is what soft wheat pasta is called”) with Bolognese sauce or various cereals. Sometimes Bolognese is served with mashed potatoes or couscous.

If you’re on a diet and really love pasta, make a vegetable version of Bolognese. It’s a little different from the classic meat version, but also has a harmonious flavour and aroma.

Bolognese sauce is a meat-based pasta sauce. Traditional for tagliatelle and pappardelle pasta, and for lasagne.

Bolognese is similar to another Italian sauce, amatriciana, even though they have different compositions.

The sauce can be called a versatile sauce. It can be used to dress literally anything. Any ordinary dish can be transformed into a refined Italian dish.

Bolognese sauce can be kept frozen for a long time.

Freshly cooked Bolognese can be frozen in portions. The sealed product can be kept in the freezer for several months. The sauce will lose neither its nutritional value nor its wonderful flavour. It can then be used for several months at a time as required.

Defrosting the sauce is not difficult either. Simply place a frozen puck of sauce in a heated pan and wait for 1 to 2 minutes.

You can use the oven to defrost. Place the frozen roast in a baking dish, cover with a lid or aluminium foil and place in the oven at 350° F. Allow it to heat to serving temperature. This may take 20 to 35 minutes.

Do not leave the sauce at room temperature – it will spoil quickly.

The sauce is spoiled if:

A pita is a scone made with yeast dough. It is not difficult to make. The minced meat sauce is ideal for filling the pita. The stuffed tortillas are soft, succulent, hearty and delicious. You can eat them as a standalone dish or as an accompaniment to a first course.

Traditional Bolognese sauce. The sauce’s meaty, tomatoy, rich flavour is complemented by aromatic herbs. Add it to spaghetti, pasta or cereals for a delicious and nutritious meal.

This dish develops the rich flavour of a real ragout, with meat and vegetables. The thick consistency of the sauce coats each strand of spaghetti, infusing it with flavour and juiciness. Perfect for a delicious family dinner or lunch.

A delicious lightweight vegan version of the classic Bolognese sauce. Soy curls give a meaty texture to this butter-free sauce. They have a fairly simple, light flavour and texture, reminiscent of cooked chicken. Make this vegan gluten-free Bolognese pasta using gluten-free pasta.

Pasta with Bolognese sauce is very simple to make. A simple set of ingredients produces a wonderful combination of flavours that will not leave you indifferent. The number of ingredients and portions can be varied as you like. You can easily feed a large family or a group of friends with this pasta.e

A dish of delicious Italian cuisine. Purchase the lasagne sheets and have the Bolognese and béchamel sauce ready. Voila, your dish is almost ready. Incredibly appetising, nutritious and festive-looking when served. And the combination of the two sauces adds an extraordinary flavour.

Spaghetti squash is not spaghetti at all but an unusual vegetable dish. Instead of the traditional squash, you can use a plain pumpkin or courgette. It is original, beautiful, delicious and very healthy. Be sure to delight your loved ones with such a masterpiece.

A new and unconventional use of Bolognese sauce. The pizza turns out tomatoy, meaty and sour-sweet. Add more cheese and maybe more than one kind – it gives more flavour and juiciness to the pizza. A great option is to use leftover sauce for pasta or lasagne.

You can make your own gnocchi or buy ready-made. Bolognese with chicken is tender, light and hearty at the same time. Sprinkle the torn mozzarella and well grated Parmesan on top.

The use of minced lamb gives the classic sauce a complexity and expression. This recipe incorporates some non-traditional flavour elements that work well with lamb – cinnamon and coriander. In this Bolognese, red wine and tomato paste form the basis of the spiciness, while cinnamon, cumin and coriander contribute a warm, spicy element. Cream, another element traditionally found in Bolognese, softens the acidity of the tomatoes and gives the sauce a silky feel.

12. Bowls of Bolognese spaghetti with turkey

These wonderful little spaghetti Bolognese cups with turkey are perfect for eating on their own or as an appetizer. Low in calories. Suitable for diet menus.

You can make the Bolognese sauce in advance. It tastes even better the next day. If you like your food with a delicate, creamy flavour, then this casserole is definitely a favourite.

All with melted mozzarella cheese, for a delicious meal packed with protein and vegetables. Your spiral sweet potato noodles break down when cooked in the sauce, this is normal, in fact it’s easier to eat. This easy and healthy dish will quickly become your favourite.

Trapani is a town on the west coast of Sicily. Potato pie with Bolognese is a typical Trapani dish. It is very simple, delicate and delicious. It’s easy to make, so it’s sure to find its way into your kitchen.